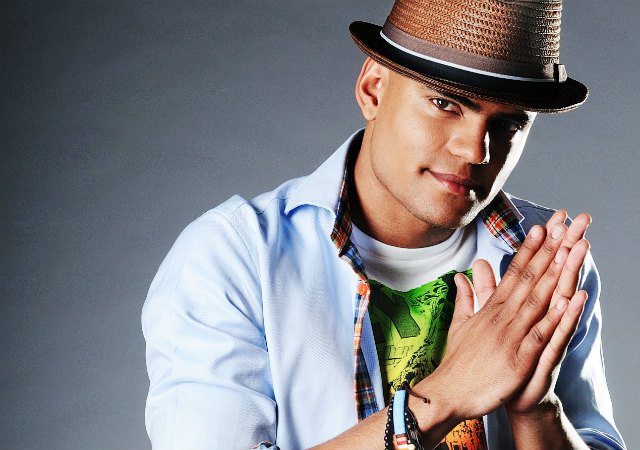 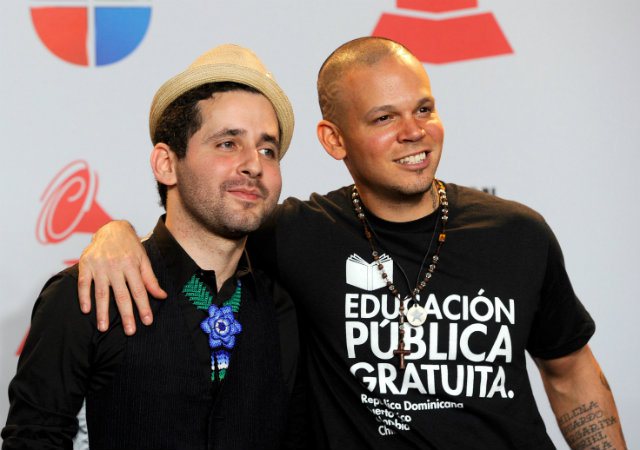 The 15th Annual Latin Grammy awards nominations were revealed to the world on Wednesday in a very unique way, and it looks like Calle 13 is taking away the most recognitions.

This year the recording academy announced the nominations on a video that was put up on the Latin Grammy site with announcements made by a wide array of artists and fans.

The urban music duo Calle 13 is the top competitor for the Latin Grammys. Eduardo Cabra  also known as “visitante” of the group is nominated for 10 awards, including producer of the year, while the Puerto Rican band is up for nine. The nominations were mostly tied to its 2014 release “MultiViral.”

Andres Castro scored eight nods followed by Tom Coyne who received seven, Julio Reyes Copello and Carlos Vives each received six nominations, and Descemer Bueno and Enrique Iglesias were next with five nominations each for their wildly successful “Bailando”and their popular song “loco.”

The Latin Grammy Awards will be broadcast live on November. 20 from MGM Grand Garden Arena in Las Vegas on U.S. Spanish-language network Univision.

Here are the nominations in other categories for the 15th Annual Latin Grammys.

Album Of The Year

Record Of The Year:

Song Of The Year

It seems 2014 is the year of musical collaboration with artists from many genres releasing their duets albums.

Pausini recorded incredible duets with Miguel Bosé, Marc Anthony, Kylie Minogue and she will be touring Mexico in the following months to serenade her fans. 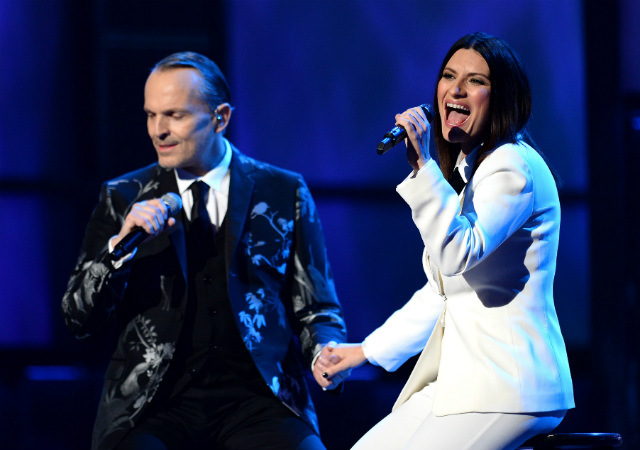 But if you are in the mood for Spanish reggae, you can listen to Rosana’s duet with Sie7e called “Sin Miedo,” her second single from her newest album, “8 Lunas.”

“8 Lunas,” consists of 16 hits from Rosanas’ career, 15 of which she invites friends and colleagues to sing with her.

“I gave them the option to sing my songs and make them their own,” Rosana told VOXXI about the process of the production.

“In other words, if someone hears the songs sung by these artists, they would think the track is theirs.”

And let’s not forget the talk of the town with the jazz standards album “Cheek to Cheek,” between Tony Bennett and Lady Gaga.

There may be 60 years between them, but the jazz singer and the pop star like making music together.

“When I met her, the first thing I said [was], ‘Let’s do an album together,’” Tony Bennett said on an interview with CBS. “She said, ‘Okay.’ It was just that quick.”

“I was a jazz singer since I was a little girl,” said Lady Gaga, “and nobody had really picked up on it. So when Tony asked, I got really excited.”

The standard version of “Cheek To Cheek” features 11 tracks with 15 tracks on the deluxe version. 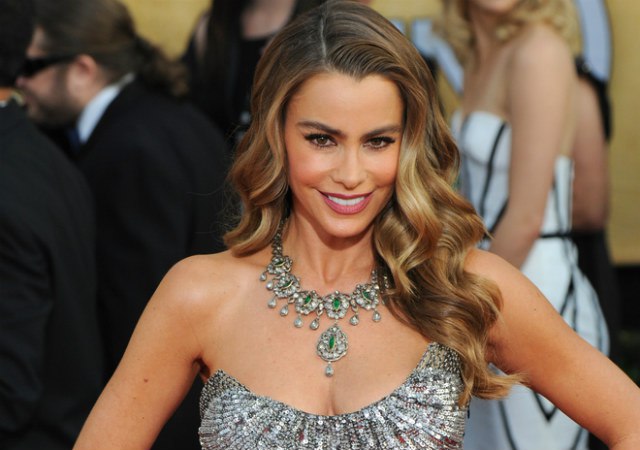 Sofia Vergara shares her beauty secrets, and she’s not afraid to shove her hair in anyone’s face! (Shutterstock)

Sofia Vergara recently revealed her 3 top beauty secrets: Her seamstress, a clean diet, and coconut oil is what keeps this sexy Latina confident on her image.

Vergara is not a fan of crazy diets; she is a firm believer that can you eat or drink anything you want but in moderation. This was all revealed in an interview with Yahoo!

“I’ve never been into any crazy diets or any crazy exercising, I have never been the last girl at the party, and I never drink a lot,” says Vergara, who will splurge on a glass of wine with dinner. Instead of suffering a pre-show detox, “I try to do the whole year in moderation. I do eat carbs, but I try to eat clean from Monday to Thursday, you know, add a lot of fruits and vegetables and protein. Sweets are the hardest part for me. I try and cut down on the sweets just a little bit the week before an event and work out a little bit more. I don’t have that much time because of work, so I try to make it easy for me.”

She explains the different rules you need to follow when you step out of the house.

“[Latin women] are always kind of sexy and we are always taught you can’t leave the house without lipstick or doing your hair or wearing high heels. I think all those things, believe it or not, can change how women feel about themselves. We all need help, we are all not perfect!”

“If your midriff is not good but you have great cleavage you should find an outfit that shows that,” she says. “You need to play with what you have.” It’s why Vergara depends on her signature hair and makeup look, never veering far from her comfort zone. “I think it is important for women to know what looks good on them,” she says.

But what is the secret behind her silky hair? “In my time off I just put natural coconut oil in my hair. Everyone compliments me [on it], and I am always shoving my hair in people’s faces,” Vergara said.

The Colombian actress confessed that her best friend and her stylist are the ones behind her perfect fitted look.

“A stylist helps me; she brings me the dresses very late! [My] stylist is a “mind reader” when it comes to selecting gowns. Because of my body type, I need to take a little bit more time than other actresses with less curves. My best friend is my seamstress.”

J Balvin, the most promising Colombian urban star in the US 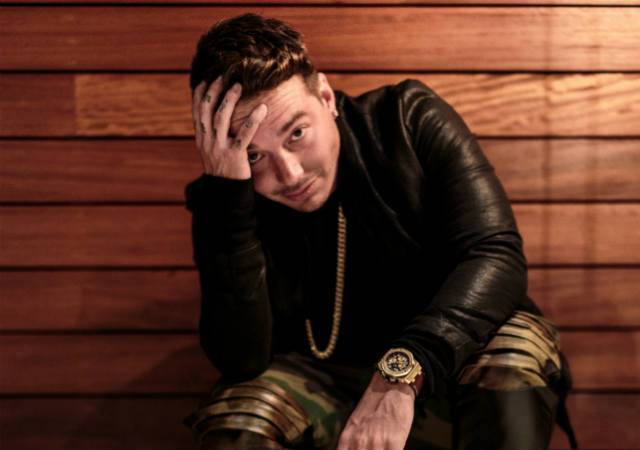 Even though J Balvin is very successful in his native country Colombia and throughout Latin America, he is taking his career to a new level by going on tour with Enrique Iglesias and Pitbull.

“This tour is a dream,” J Balvin told VOXXI,”this is a huge opportunity to reach the Hispanic audience in the U.S. and also to expose my talent to a bigger audience, I’m still in shock.”

Spanish megastar Enrique Iglesias is just as thrilled to be touring with J Balvin, even sharing a “selfie” moment with the young urban singer.

“Guys I’m excited to announce that @JBalvin is coming on tour with @pitbull and I!!!,” Iglesias shared on social media.

The Colombian artist, originated from Medellin, shared with VOXXI that he started out in a rock band as a guitar player but it wasn’t until he moved to New York and lived in the “big apple” for sometime, that he fell in love with urban music and Hip Hop.

The 29-year-old singer still remembers how he felt when he step on a stage for the first time to perform his music.

” I was very anxious and scared on my first concert… I was eager to see how the audience was going to take it, it was an amazing feeling.”

The rising reggaeton star is always traveling and touring around the world and not long ago he was recognized in Romania as artist of the year in the Zu Music Awards.

“They don’t speak spanish but they feel connected with my music and my videos,” J Balvin said.

In addition, J Balvin confessed that his next big dream will be to conquer the global market and collaborate with different anglo artists such as Drake, Rihanna and Justin Bieber.

His success has been credited for his charismatic personality and hard working attitude but he revealed that the key to all of this is that, “he is just a young artist like no other with big dreams and huge desire to succeed.”

Take a look at J Balvin’s crazy hangover video, “6AM” featuring Farruko, which is currently in the “Top 5 on Billboard’s Latin Airplay Chart.”