The Wat Buddharangsi temple is located in Homestead Florida, on June 24, 2012 the temple will celebrate the 30th anniversary as one of the South Florida most active and well known Buddhist temple. The design of the temple was created by Miami Architect Noppom Poochareon; if you visit the temple you will see an enormous and tall bronze Buddha in the midle of the temple  “the PhraBuddhadhammachinaraj” the sculpture was so big, that they had to place the statute before they installed the roof of the temple.The 23-foot, five-ton gold-leafed image of a Buddha  weighs 5 tons and is 80 inches wide, it is primarily bronze but it also has cooper, brass, gold and silver, one of the most important facts of the Buddha sculpture is that it came from Thailand.

I got the chance to speak to one of the monks in the Wat Buddharangsi temple, his name is Thanee Khonkla,Thanee decided to be a monk and practice the Theravada Buddhism which means the doctrine or tradition of the elders at the age of 20, this practice its dominant in southeast Asia. Thanee was ordained as a buddhist monk on 1992 at Wat Benchamabopitr Dusitvanaram in Bangkok , he received an education back in Thailand and he has a bachelors in Business Administration and Marketing.

Check out the video of the Wat Miami  Buddhist temple 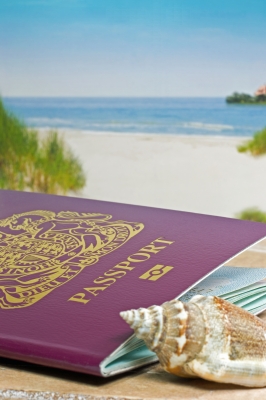 Credit: Passport At The Beach by Grant Cochrane

Cocoa Island is located on the Maldives island of Makunufushi in the South Kaafu Atoll, fenced by stunning beaches with clear, pure water and relaxed  luxurious resorts. The Dhoni suites are built right on the water and are accessible through wooden walkways.

Hungry? Where to eat? : Enjoy the Indian Ocean’s abundance of seafood

Ufaa Restaurant : meaning happy in Maldivian, It offers fusion of Sri Lankan, Indian, and Mediterranean cuisine with an emphasis on fresh seafood and local, organic produce.