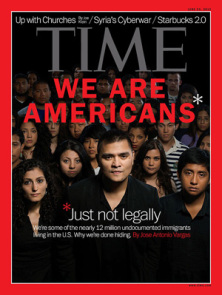 In front of many Latino students at Florida International University, Jose Antonio Vargas shared his experience about being an undocumented immigrant who came to the U.S. when he was just a kid.

The Pulitzer Prize-winning journalist lives in legal limbo like many young immigrants because his legal situation depends on the Dream Act.

When he was 16, he rode his bike to the D.M.V. office to get his driver’s permit. When Jose handed the clerk his green card as proof of U.S. residency, the clerk looked at the document and said. “This is fake,” she said “Don’t come back here again.”He went back home and he confronted his grandfather asking if the green card was fake and with shame on his face his grandfather confessed that it was. At that moment he learned he was an undocumented immigrant.

Jose continues to fight for immigration reform talking about Define American, a non-profit organization that seeks to elevate the conversation around immigration and the activist has a new cause to fight for, he is discouraging news outlets everywhere from using the word “illegal immigrant.”

Jose Antonio Vargas has become the most recognized face of Dreamers  since appearing in the Time magazine cover with fellow undocumented immigrants  “WE ARE AMERICANS” in bold, red, capital letters. An asterisk underneath says “Just not legally.”

VOXXI had the opportunity to interview Jose Antonio Vargas at the FIU event.

VOXXI: Define what it is to be an American?

VOXXI: Why do you support immigration reform?

Vargas: Why do I support immigration reform, I support immigration reform because it actually is not just about immigration you have to be tied to the very nature of how America is changing and you also have to be tied to.When we are talking about immigrant rights we are also talking about citizenship rights and I think it is so interesting that we can probably talk to a lot of undocumented people who proved to American citizens—what it is like to be an American like work hard, want to contribute, respect other people.

VOXXI: What do you think about President Obama and Mitt Romney’s immigration policies?

Vargas: Well I think President Obama’s immigration policies are much more married to reality than Mitt Romney’s. I just kind of tune out when Mitt Romney talks about self deportation, it sounds almost comical. It sounds like you push a little button somewhere and you just get ejected or something. It seems completely unrealistic and I think its incredibly disrespectful to many people. Again, people like me who is not like I’m the only undocumented person in my family. I’m actually the only one everybody else is an American citizen so can you imagine what they think when they hear Mitt Romney says you should self deport what is my grandma going to say, she is American citizen tax paid since I been here in the 1980’s.

VOXXI: What do you think about the future of the dreamers?

Vargas: I am optimistic that immigration reform its going to happen that means that the Dream Act goes first maybe by next year. I think it will, whatever it is I think the dreamers have completely pushed this issue. I mean they are the ones as far as I’m concerned the undocumented youth the people that have been coming out, I was late to the party they been showing up far earlier than me. I just showed up last year unannounced they been doing the hard work for years. They really deserve the credit for what’s happened here the fact that the dream act is completely tied to immigration reform.