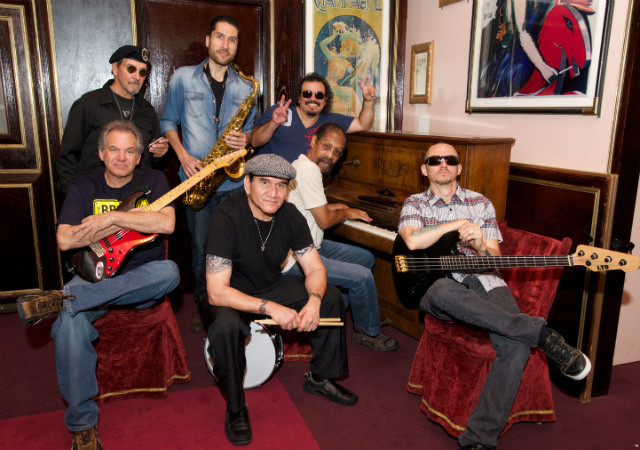 Members of the band from top left going right and down: Stanley Behrens plays the Harmonica- David Urquidi plays the saxophone and flute- Marcos Reyes is the percussionist, Stuart Ziff is the guitarist, Sal Rodriguez is the Drummer, Lonnie Jordan is the founding member, lead vocalist and plays the keyboard and Franciso “Pancho” Tomaselli – is the Bassist of the band “WAR.”(Courtesy of Rogers & Cowan )

Lonnie Jordan, the founding member and lead singer of the legendary band WAR, talked to VOXXI about the random places where the band has found its inspiration, and the upcoming expectations for their new album “Evolutionary.”

How the band WAR started and how everyone came together?

In 1961 we were called The Creators and were teenagers who knew each other from the neighborhood and through school. We evolved and started changing members at about 1968. That’s when we changed our name to WAR.

“Low rider” was a huge success how did you guys came up with this legendary song ?

The song came up by seeing actual Low Riders on the streets. At the time, they were only on the West Coast – from Los Angeles to Albuquerque.

What was the inspiration for “That LA Sunshine”?

My inspiration for the song is as simple as it sounds: ‘I woke up this morning to a beautiful day, pulled back the shades and felt the sun on my face!’ It really is about the beautiful Los Angeles sun.

Can you give a little bit of background about the Latino members in the band?

Sal Rodriguez, the drummer, is from Tijuana, Mexico. Marcos Reyes is our percussionist and he is from Chihuahua, Mexico. Our saxophonist David Urquidi is from Montebello, CA. Bassist Pancho Tomaselli is from Ecuador.

Tell VOXXI about the collaborations with Cheech & Chong, Joe Walsh, and the USC Marching Band?

Cheech & Chong joined us on “That L.A. Sunshine” by writing a comedy skit to incorporate into the song. It was great to reunite with them after they used ‘Low Rider’ in ‘Up In Smoke.’ That was the very first movie to use any of our music! As for Joe Walsh, we have so much respect for him and The Eagles, so it was a natural choice to use him on “Mamacita.” The USC Marching Band is an iconic Los Angeles band,and the song wouldn’t have that L.A. feel without them. Plus, the melody line in the song sounds like a marching band, so it was a great fit.

Do you have a Latin Beat song in this new album?

What to expect from the new album “Evolutionary”, especially after 20 years of not releasing a new album.

Our expectation is to release a new album to make sure people know we’re still here and creating new music for our fans. We always want to make and keep our fans happy with new music as well as our old.

The album also includes a re-mastered of their 1976 Platinum certified “Greatest Hits” album and for the first time it will be available digitally.