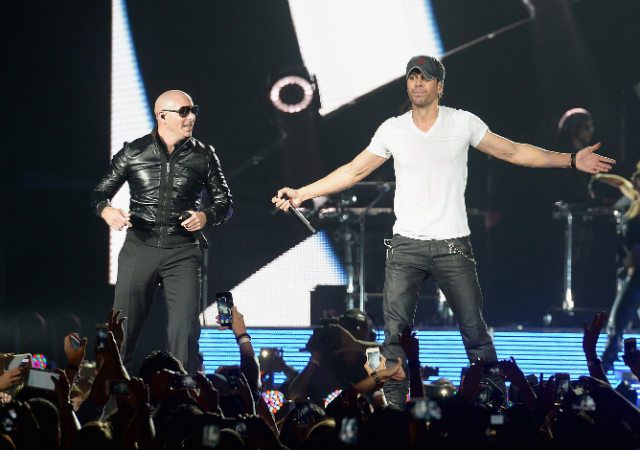 International superstars Enrique Iglesias and Pitbull brought the party of “Sex and Love” to their beloved hometown Miami, with up-and-coming Colombian star J Balvin, who opened the show with his mega hit “6AM” along with surprise guest Farruko.

Pitbull was up first, using his hourlong set to showcase a South Miami Beach style party, with songs such as “Dont’ Stop the Party,” “Fireball,” “International Love” and, best of all, “Rain Over Me.” The Cuban rapper also paid tribute to his collaborators that he has worked with over the years, including those with JLO, Marc Anthony, Shakira, Christina Aguilera, Neyo, Kesha and many more.

“I used to perform on the corner of NW 7th Avenue and 79th Street,” he recalled. “It’s an honor to be able to perform at the AAA.”

Pitbull had everyone jumping during the show but when Enrique Iglesias hit the stage the party was just getting started and the crowd went wild with “I’m a Freak.”
Iglesias sang some of his greatest hits: “Finally Found You,” “Bailamos,” “El Perdedor,” “Loco,”and the summer anthem “Bailando” with Gente de Zona.
And what’s a party without alcohol and some confessions?

Iglesias invited a fan on stage for some shots as he opened up about the separation of his parents when he was younger, and the time he moved from Spain to the U.S. He topped the confession off by singing a beautiful cover of “Stand By Me,” a song that he says made him nostalgic about those hard times.

Both singers made reference of how much they loved Miami because it was where their careers started and they both interacted with the audience to show their appreciation for the “305.”
The Spanish heartthrob and the Cuban rapper kept the audience on their feet all night and at the end of the concert the energetic duo said goodbye with their 2010 smash “I Like It” claiming “We fucking love you, Miami!”