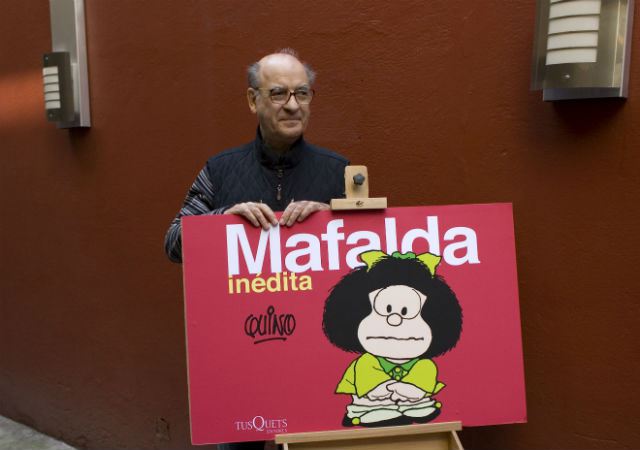 The Argentine cartoonist Joaquín Salvador Lavado, better known as Quino, creator of the legendary cartoon “Mafalda,” has been honored today with the 2014 Prince of Asturias Award for Communication and Humanities.

“Marking the 50th anniversary of Mafalda’s birth, the lucid messages of Quino prevail for having combined wisdom and simplicity in a drawing with the depth of his thinking,” Director of the Cervantes Institute and chairman of the jury that granted the Argentine cartoonist the award, Víctor García de la Concha said today.

The first Mafalda cartoon was published on September 29, 1964. Mafalda was a rebellious, smart and sarcastic girl, who was mainly concerned about world peace and human rights, the character hated soup and loved the Beatles.

Mafalda was published from 1964 to 1973. The comic was translated into more than 30 languages.

Mafalda is also recognized as the protagonist for human rights campaigns in Argentina for organizations such as UNICEF.

The Prince of Asturias Awards are intended to reward the scientific, technical, cultural, social and humanitarian work of individuals, institutions, groups or institutions throughout the world.

In communications and humanities, it recognizes those who make an important contribution to universal culture in humanities activities and social media.